The Flax Scutching Festival features descendants of Ligonier Valley pioneers recreating the art of making linen from the flax plant.

The cultivation of flax appears to have originated in India and spread over the whole continent of Asia at a very early period of antiquity. History seems to imply that it was grown in Palestine even before the conquest of that country by the Israelites about 1300 B.C. In the Old Testament it was one of the crops damaged by thunder and hail as the plague against the Egyptians for confining the Israelites to slavery (Exodus 9:13), and Rahab hid the spies Joshua sent out under flax on her roof (Joshua 2:6). The process used at the Stahlstown Flax Scutching Festival today was the process used by our ancestors in the New World and the Old World; (1) the harvesting and drying process. (2) The peeling of the stalks and separation of the fibers, (3) the hackling (heckling) and (4) the weaving of the cloth.

In 1907 Elmer N. Miller, who was Justice of the Peace in Stahlstown at that time, conceived the 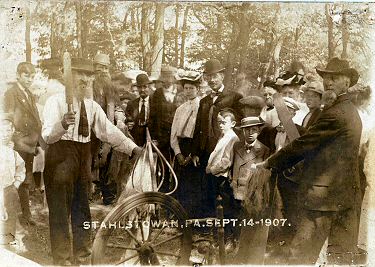 idea of the yearly gathering of old friends and acquaintances, and as an added attraction, the age old scutching of flax and the making of linen cloth was made the center of the celebration. This festival became a yearly event, with the exception of the years 1942 to 1947, when World War II and economic conditions made it inconvenient. But the festival was revived in 1948 and has been observed as an annual get-together since that time. At the first festival it was estimated that 1,800 horse-drawn rigs were parked on the grounds. It has grown in popularity since 1907 but still the age-old customs and dress are used to retain the quaintness of the occasion and events are scheduled to 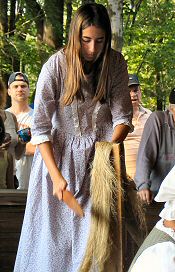 resemble the olden days so that as much as is possible of the antiquity is captured.

As early in the season as possible, plots of flax are planted by local residents. This plant, as it grows, resembles oats, having small narrow leaves, blue flowers and slender stems. The plant will average about two feet tall. The seeds of this plant are used commercially in the tincture of linseed oil, the thread-like fibers of the plant being spun into linen thread. However, before the fibers are spun into thread, there are several processes that must be completed. First the plant must be harvested. In harvesting, the plant is pulled from the ground by the roots because there is contained some of the finest flax fibers. It is then beaten to remove the seeds and after dampening then drying several times in order to loosen the wood center and the outer layer of bark from the flax fibers, the plant is ready for the next operation. This is known as scutching and where the festival gets its name.

This operation occurs in an implement know as the “breaker,” a 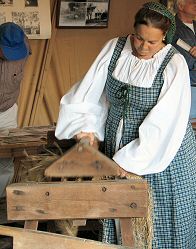 cantilever made of wooden blades that break the wood fibers of the plant and start the process of loosening them from the threads. After these wooden-like fibers are broken, the plant is held in the hand, placed against what is know as a scutching board and paddled until the pulp is separated, causing the broken wood fibers to fall out. It is then ready to be combed. The strands of flax are then combed through parallel rows of steel spikes, nailed to a board to form what looks like teeth of a comb. This process will remove bits of the outer wood and bark from the fiber, also any fiber that is unfit for spinning into yarn. This is the process known as “hackling (heckling).” 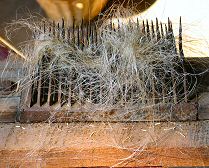 The remains of hackling will be strands of fine floss which are now ready to be spun into linen thread. This spinning operation requires the nimble fingers of women who are skilled in this art.

After the thread is spun, it is ready to be woven into cloth. This is a very slow and tedious process but very rewarding. The linen which has been woven is made into table covers, jackets and numerous other articles.

The Flax Scutching Festival offers demonstrations of the complete process of making Linen from the Flax plant. The festival also has great homemade food, crafts, antique farm equipment, live music, civil war encampment, covered wagon train encampment and a staged Indian raid. The Indian raid is a realistic battle between Indians and Settlers, representing the hazards of the era.